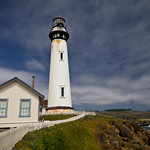 I didn’t get a chance to post a blog post back in January when Dave and I went on a 3-hour whale watch boat tour. Truth be told, it wouldn’t have been a very interesting blog post, since we saw precisely zero whales. We did have a nice boat ride, the highlights of which were a huge group of California sea lions, some beautiful common murres flying in formation over the water, and a really good look at Mavericks. We made a whole day out of it: drove down the coast afterward, had lunch in Santa Cruz, stopped at Pigeon Point Lighthouse.

I was pleasantly surprised the following Monday when I received an email from the Oceanic Society acknowledging the “regrettable fact” that we hadn’t seen any whales, and offering us the opportunity to reschedule for another tour at no additional charge. Sure, why not? 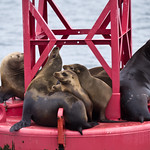 So we set out once again for Half Moon Bay and got on a boat in Pillar Point Harbor with about 40 other people, plus a naturalist and two women from the Marine Mammal Center. As before, the captain of the ship shared that previous trips that week had spotted quite a few whales, and at this time of year it is common to see mother whales with their calves returning from Baja California. We went about a mile and a half out from shore, and headed south.

This time the trip was a bit warmer, slightly less overcast, but fewer sea lions and sea birds overall. We did see harbor porpoises quite a few times – at least, their fins – but they’re really hard to photograph. 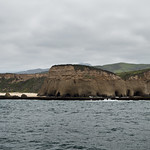 After heading south for over an hour, the captain came on the PA system with what had become a familiar announcement: “Well, folks, I don’t know what to say….” He turned toward the coast and started heading north about a half mile off shore. The shoreline on this part of the coast is just beautiful from the water – one would never know from land how cool the cliffs look below. 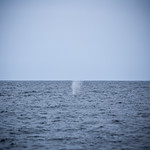 At last, someone spotted a whale! A spout, a little bit of the back… and then the whale dove underwater. The ship stopped to wait, while the captain explained that typically whales stay underwater for 3-5 minutes before coming back up for air. We waited at least 10 minutes before the captain concluded that we must have spooked it. He poked along up the perhaps empty whale highway to see if we could find any of this one’s companions, but no luck. That was our whale spotting for this trip.

Dave and I shrugged, and figured we got 6 hours’ worth of boat rides for the price of three. When we got back to shore, we got into our ZipCar and drove down past Pescadero to the Highway 1 Brewing Company, where we had a very yummy lunch. (Don’t let the menu fool you. It’s a lot of food.) 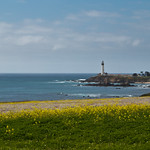 Heading back up the coast, Dave wanted to stop to get a couple of photos of Pigeon Point Lighthouse as seen from the south. I sat in the car and gazed at the ocean while he darted across the highway to get his shots. As I watched, I saw no fewer than six whale spouts! Dave saw them too, and when he got back in the car, he suggested we drive over to the lighthouse, where there’s a perfect overlook for whale spotting. 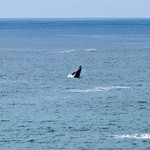 Our luck evened out. There were quite a few whales traversing the whale highway just a few dozen yards from shore. Our timing was perfect – a calf decided to dance out of the water while we watched! We overheard the park rangers a bit later talking about how that was the only whale breech that day. Very exciting! Check out Dave’s sequence photo here.

The lesson learned is that a boat tour doesn’t seem to be necessary to see whales along the California coast, as long as you know where to go. Still, the boat was a fun time.

View all posts by nocureforgravity